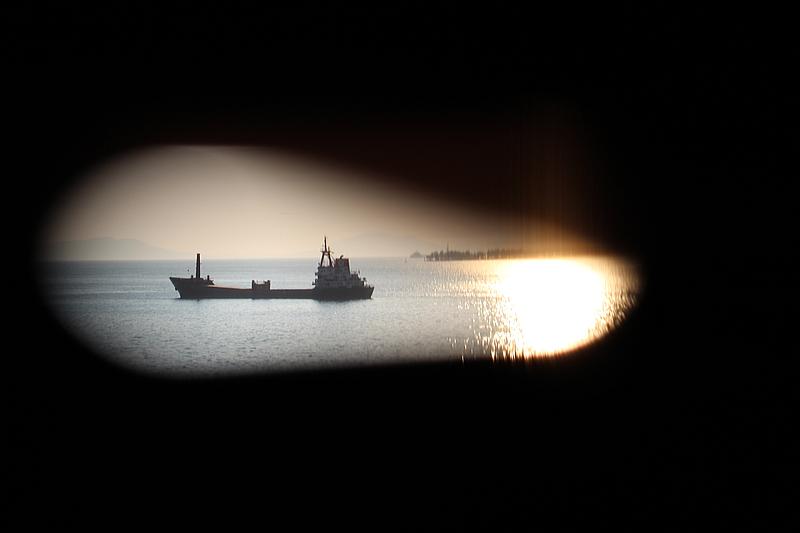 Igoumenitsa: Stories From a Harbour

Igoumenitsa is a town with a harbour in the north-west of Greece. It is the last city on our way to the border to Albania. From here ships are mainly going to Italy or the holiday island Corfu. Igoumenitsa is mainly a transitional city for most people. Aside from the harbour and the seaside promenade with its cafés, restaurants and a funfair there is not much going on in the rest of the city. During the day Igoumenitsa looks deserted, but in the evening as soon as the sun has gone down the people come out to the streets.
Focal point of the city is the terminal of the harbour. It is relatively cool inside the grey building and the people are buying their tickets, waiting for their ships or just searching shelter from the afternoon heat. Here are three stories from that place.

The Captain is stranded. For four months, since the 25th of April to be precise, his ship has been sitting in the port of Igoumenitsa with a dropped anchor. He has exchanged his captain’s uniform for jeans and an unbuttoned denim jacket. And like most sea creatures on land, he is helpless. The Captain and his crew are from Turkey. They wanted to make a short stop in Igoumenitsa on their way to Italy and now have to argue with the police about Visas to be allowed to stay in the country. In the terminal building of the harbour the Captain is speaking with staff of the port authority who are keeping him, his ship and his crew in the coastal city. Two of his crew members are watching the discussion, one of them a man of more than 60 years with a bent back and grey hair, the other a young man with scars from burns on his hands. They can’t follow the discussion though, as they don’t speak or understand English.

For eight months the Captain and his crew haven’t been paid. He isn’t sure why that is. Probably the company that owns the boat is in financial trouble. It seems that is also why the port authority isn’t letting the ship leave. The company hasn’t paid the port for the place where the ship has dropped anchor. „They want 100000 Euros before they let us go on“, the Captain says. He doesn’t know where that money is supposed to appear from. When an officer of the port authority sees us talking to the Captain he intervenes and takes him back to his office. We’re waiting for the Captain outside of the building and about half an hour later he and his crew walk through the door, though not knowing much more than before. „No one knows what is actually going on.“ His plan now is to get his crew back home. Via Thessaloniki they will try to get to Istanbul. But it might be some time before that will happen, the Captain assumes. „There’s no light at the end of the tunnel.“

Christian is also stuck. He’s got one hour to get a tax idendification number before the ship to Ancona leaves without him, his bus and his passengers Pepe and his wife. „I’ve had that number sometime somewhere, but I’ve never used it and threw it away. You don’t happen to know yours, do you?“ Without the number he can’t buy a ticket for the ship to Ancona. And without the ticket he will have to get his bus to Mali using a different route.

Christian is a busdriver without a busdriver’s driving licence. His route isn’t featured in any busplan, he has no fixed schedule or stops and he always drives different busses. Only the starting and finishing points of his routes are fixed. As is the price of his bus. The bus the 33 year old is driving this time doesn’t look memorable. It’s simply a big, blue bus. He bought it for around 7000 Euros from his friend Iannis in Thessaloniki. Another acquaintance has, for a fee of 750 Euros, found a buyer in Mali. Now the bus only need to get there somehow. Every two to three months Christian is making that trip. It usually always works pretty similar. Iannis finds an old bus, Christian buys it, drives it from Thessaloniki to Mali, where someone else locates a buyer. How much Christian is selling the bus for he won’t say exactly. This time he has received a down payment of 8000 Euros before he started driving. The rest of the money he will get in installments after he delivered the bus. The journey takes about two to three weeks, on a typical day Christian drives between eight and sixteen hours.

The man from the Bergische Land near Cologne went on his first journey with his then-girlfriend. They travelled for five years, through India, Pakistan, Europe and northern Africa. They smuggled cigarettes to Germany and sold them there to have enough money to go on. That was after his social service and his apprenticeship to become a mechanic. He would only start selling busses later. Now his girlfriend is his ex-girlfriend and Christian is mostly travelling alone. „In the long run that’s a problem. There are some moments you have to share with other people.“ That’s why he takes other people on his bus from time to time. This time it’s the 66 year old Pepe and his wife who are joining him in Igoumenitsa. The retired couple views the journey as a free holiday and adventure trip. Also, Pepe can drive the bus to Spain, the part of the journey that could get Christian in trouble if he is caught driving without a busdriver’s license. He will be back behind the steering wheel in Morocco. „I’ve wanted to buy a busdriver’s license in Mali for some time now“, Christian says. „But somehow I just haven’t gotten round to it yet.“
Sometimes Christian takes refugees on his bus. On his current trip he and Iannis went from Thessaloniki to the border of Macedonia to see what the situation is like. He shows us photos of the refugess waiting on one side of the border fence and the policemen and women lined up on the other side. „In the end, most of the refugees got through“, Christian tells us. He let a few of them ride on his bus some way when they travelled on. „Usually I am trying to not let those things get close to me but sometimes it hits me pretty hard. The situation is just messed up.“

Christian doesn’t really view himself as German. „I feel like maybe I’m half German, a quarter Arabic and a quarter from Mali.“ He only seldom speaks German anymore, mostly it’s English, Arabic, French or Italian. But Mali is what he calls home. „Mali is absolutley my favourite country. The culture there is great and really old.“ There he has a small flat where he spends his time when he is not on the road. However, he doesn’t want to stay in this line of business forever he says. Life on the road is taking its toll. At the moment though he has to keep going. „I had a lot of money, didn’t know what to do with it and invested it in Africa and lost it.“ Now he is in debt, owes money to Pepe among others. But at some point he hopes to lead a calmer life. That seems to be far off into the future though. Until then he has smaller dreams. In two to three years he wants to switch from busses to trucks. And in the next hour he wants to find a tax identification number. Right now Mali is waiting.

Igoumenitsa meant hope. Hope for a ship, hope for Italy, hope for a better life. For many refugees Igoumenitsa was a first destination, after they came from Macedonia or other routes to Greece. In the harbour of Igoumenitsa ships are constantly arriving and leaving from and to Italy. Italy promises a better life than Greece, where most refugees aren’t doing well. Back in 2011 hundreds of refugees were living in the forests and mountains surrounding Igoumenitsa. Alexander Besant, a French journalist, was there, a few days after the camp of the refugees was cleared by the police the same year. The refugees had lived there for more than a year, he reports, without water, electricity or food. They had to eat what they found in the garbage bins. Sometimes the NGO Medecins du Monde came and brought some food and something to drink and looked after the refugees’ health. Then the police cleared the camp. Today there a fewer refugees in Igoumenitsa, the residents tell us. Medecins du Monde has stopped their operations there. The organisation has to think hard when asked to even remember they were ever active in Igoumenitsa.
In November of 2014 the police arrested a 23 year old Syrian who tried to get onto a boat to Italy. He had tried to hide between the waiting trucks when a person working in the harbour spotted him and brought him to the police. One officer of the port authority estimates that there are still about 20 refugees in the city. You can see them in the terminal building of the harbour. Families who are sitting in sleeping bags and blankets, waiting.