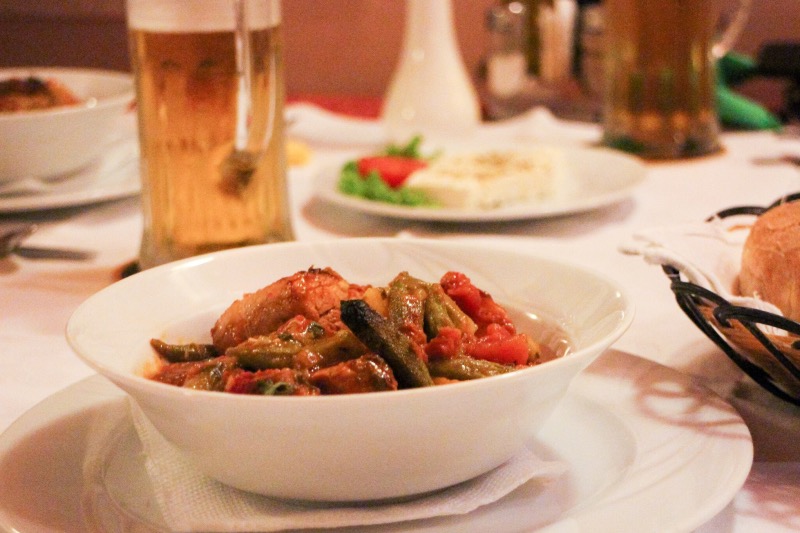 A country’s taste is part of its culture. Therefore we collect recipes from every country we visit. Here is one from Albania.

In Albania we cooked with Adrian Labi. He owns a restaurant in Tirana, the capital of Albania. The chef has traveled a lot. He has lived in Greece and learned to cook in various European countries. That’s why there are a lot of international dishes on his menu – but none from Albania. Nevertheless he took the time to share a recipe for an Albanian dish with us. It is called Tave Me Okra. 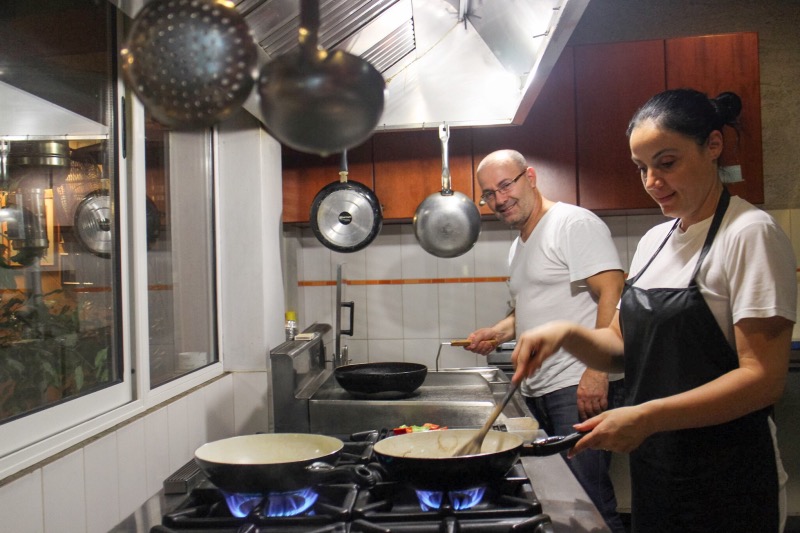 Tave Me Okra – that is a casserolle with Okra. Okra is a vegetable we didn’t know until Adrian showed it to us. The green fruit looks a little bit like a pepper the size of a peapod. It doesn’t taste particularly exciting but it has an interesting texture: The inside is very slimy. Adrian doesn’t want to have this slime everywhere in his dish so he doesn’t cut the okra open before serving it. But first things first:

To start with: The meat

Tave me Okra is a dish that is prepared mainly in the oven. However, there are some things you need to do before you can relax and watch the dish being baked. Adrian begins by sweating onions and garlic. He adds the meat and sears it. For four to six people he uses six chunks of pork, each the size of a fist. But the dish works with different meat as well, Adrian says. 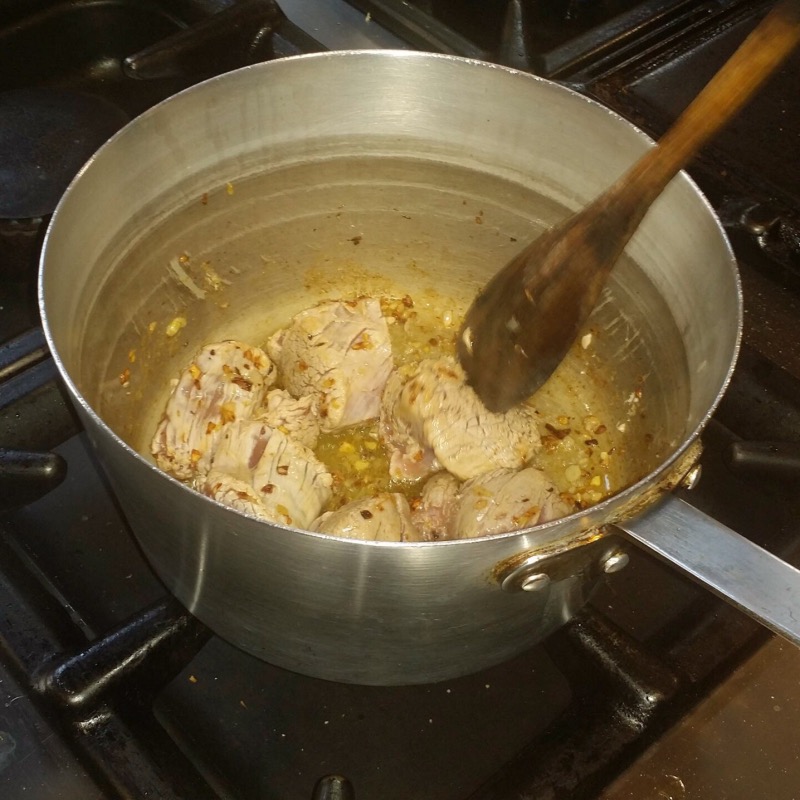 Next up: The sauce

Adrian puts tomatoes on top of the pork and cooks them so that they turn into a sauce. He uses parsley and oregano to season the sauce and continues cooking it. He leaves the pork in it the whole time and lets it simmer for a while even after the sauce is ready. 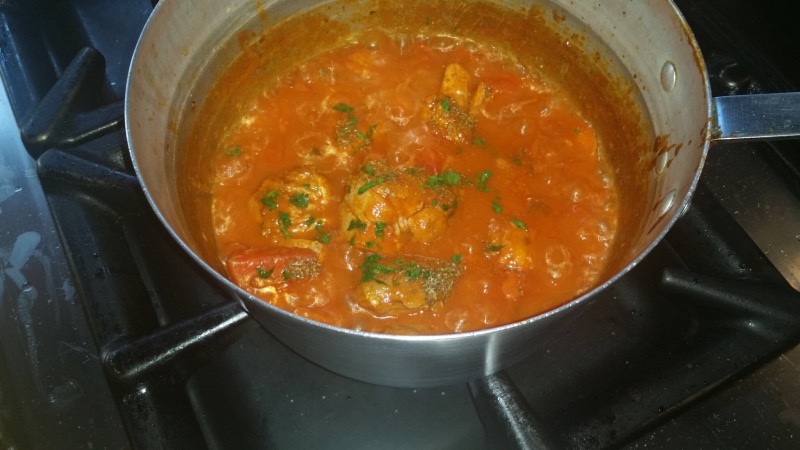 Last but not least: The vegetables

In the meantime Adrian prepares the casserole dish. That means washing and cutting various vegteables. For the dish he uses roughly cut potatoes, chunky pieces of carrot and of course the okras. Adrian washes the okras and carefully skins them at the hard end to make sure the slimy inside stays inside. He puts the raw vegetables in the casserole dish and fills it up with the tomato sauce and the pork afterwards. 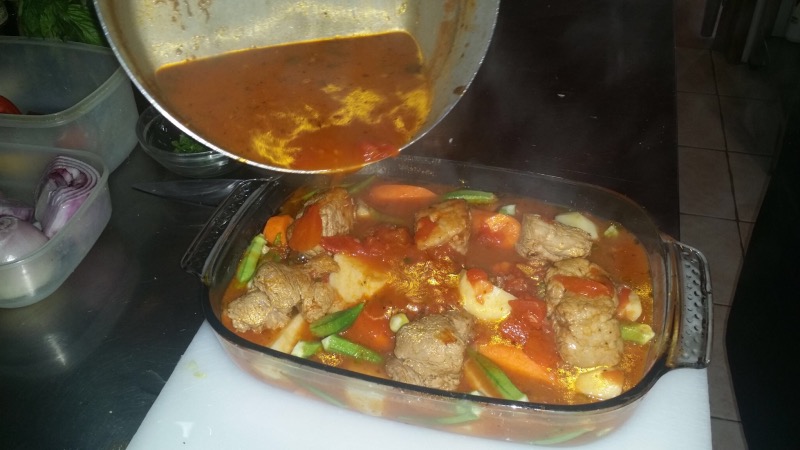 The final step is baking the casserole in the oven. It takes one hour for the pork and potatoes to finish. When Adrian takes the casserole out of the oven some of the tomato sauce has vaporized and left a brownish sweet crust on top of the dish. 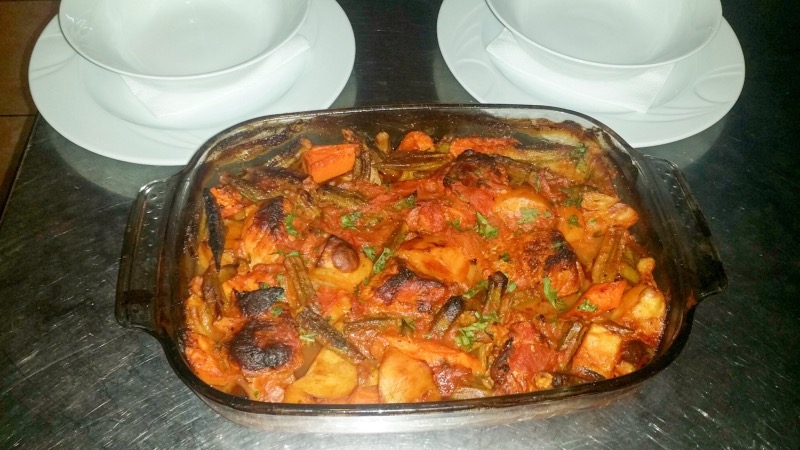 Tave Me Okra smells and tastes similar to ratatouille. »I made it the way I know it from home«, says Adrian. »It is a tradional dish from the south of Albania.« He serves bread, beer and feta cheese with the casserole – that goes well together.

After we finished eating and Adrian fed all of his guests he drank a beer with us and we spoke about the Albanian cuisine. Albania is a mountainous country and therefore agriculture is traditionally difficult. That’s why Albanian cuisine is the opposite of fancy. A very common dish is Byrek, says Adrian. It is a simple dough filled with spinach, cheese, leek, beans and sometimes even meat. Byrek is sold all across Albania at little stands which are called Byrektore. You can get Byrek basically everywhere in Albania – except for Adrians restaurant as there are no Albanian dishes on his menu.