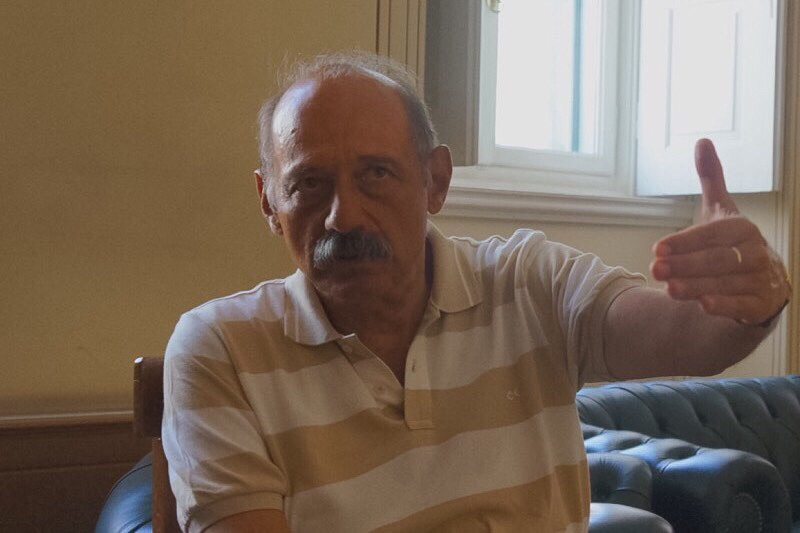 The Beginnings of Europe

Kostas Buraselis is a professor of Ancient History at the University of Athens. We met him at the university to talk about the ancient Greek civilization and the beginnings of Europe.

Greece is often called the cradle of democracy and seen as a starting point for Europe as we know it today. How did it come about that Greece invented democracy and that democracy has spread throughout Europe?
What is the nature of democracy? A large group of people, of citizens, start to believe that they should have equal rights and of course also obligations to their shared state. That was a new idea. Let’s assume that at the beginning of the fifth century BC the largest state formation was the Persian Empire. The structure there was entirely different. Then in the cities in the Greek regions there is a development that leads to the invention of democracy. The important thing was, that aristocratic regimes started collaborating with the common people against other aristocrats. Cleisthenes, who is known in history as the father of democracy, was an aristocrat. He was from one of the big houses in Athens, the Alcmaeonids, but at the same time he collaborated with the common people against his aristocratic rivals. That way the people gradually gained more and more capacities, rights and obligations in the state and eventually this new form of state governing got the name democracy. But you should never believe that the ancient Greece was all democratic. The invention of democracy was so important that you often forget that there were other state forms on the side that weren’t based on this principal of equality, but rather continued the tradition of the aristocracies.

Would you say that you can directly feel the influence of the ancient Greek civilization in the Europe of today?
Yes, of course. Every time you use the word democracy or think of the idea itself, that people can participate in political decisions, you automatically make the connection to Ancient Greece. Imagine an assembly in Athens and one in Rome. In the Greek democracy the people of Athens would gather and the speaker would ask: “Who wants to speak?”. Everyone could raise their hand and contribute. As a result of all these contributions a decision would be found. In Rome things were different. The consul would present a text and the people could say yes or no. Furthermore, the Romans wouldn’t count hands to see which choice had been made. They would count groups as centuriae, a sort of military division. We would form such a group, we would congregate and we would cast one vote. Not the person as a single unit was the basis of the decision. This personal responsibility of the citizens is not present. That is a Greek inheritance.
Back then the Greeks didn’t really have the concept of Europe on the radar, right?
The word Europe is Greek. Theres is a story that Europe was a beautiful lady that was kidnapped by Zeus in the shape of a bull. He brought Europe to this area on his back. For the ancient Greeks Europe was the part of the earth that was opposite of Asia. That was a big and clear difference in the ancient Greeks geographical understanding. It’s only that Europe wasn’t clearly defined concerning where it ends. You have to know there were many other people and cultures, some of them they knew by being close to them like the people of Italy or in the Balkans, but about the rest there was only some vague knowledge. Then there were the Greek geographers who were traveling in many areas of Europe gathering information. But the Romans really got to know more about the people of western Europe, because they were the ones exploring western Europe more and more and of course they brought them under their banner.

You said that from the beginning Europe was a separate part in the minds of the Greeks. Why was that? Was that simply because they were easier to reach or was it for cultural reasons?
Geographical and cultural reasons both. In the Greek understanding the sea was a dividing line. The Hellespont was. according to Greek understanding as it still is today, the Area separating Europe and Asia. At the same time, the Mediterranean was a dividing line with Africa. The Greeks knew about Africa because of Egypt and the whole coast. Continents already existed in the understanding of the ancient Greeks. From a cultural point this very interesting. Already around 500 BC the Greeks had relations to the Persians and other oriental civilizations. They never showed any arrogance towards these people. Tensions first arose as a result of the Persian wars. That was a very important phase for Ancient Greece. The Greek resistance to the Persians’ attempt to conquer cities on the Greek mainland strengthened the Greek’s confidence. Nobody would have ever thought before that the Persian empire wouldn’t be able to conquer the Greeks. The Greek victory was a tremendous boost to their confidence. But even in this phase they never ended the relations with the East which then returned to Greek history with Alexander the Great. Because even Alexander who defeated the Persian empire never thought of his rule as a rule over the Orient, but as the formation of a new ruling class that included both Greeks and the people of the Orient. This is a strange and very interesting dimension of Alexander’s personality.

You said that Greece developed a new self-understanding through the threat from the East. Modern Europe with its various different countries and different forms of government grew together during the cold war, a time where there were threats from all sides. Can one compare that? Can you say that Europe found its self-understanding because there was a threat the same way the ancient Greeks did?
Of course the premise was totally different, but perhaps the resemblance lies in the role of external factors that were crucial in both situations. It is not easy to come to an understanding of the similarity of interests, the principal similarity of political, social and cultural prerequisites when you are caught up with yourself. It is necessary to leave your own internal world in one way or another for you to understand what you have and what you actually are. I have to admit that I myself was impressed that I understood my Europeaness more in the United States than at home. Take the idea of the European city for example, you won’t find this concept in all American cities. Rather their structure resembles, if you want to be provocative, that of the classic towns we know from western films. One central street in the middle, buildings on the left and right and then the town ends. The idea of a historic city center with a market, with all important buildings and a central public square will not be found everywhere in the United States apart from the East coast.
Altogether you can identify your being better and more accurately when you can compare it to something else and during the time of the ancient Greeks these were the Persians. At the same time we shouldn’t view this as a never ending polemic tension between the Greeks and the Persians. They maintained relations with each other. They always had trade relationships. They imported products from the East and in return Greek objects often were exported to the East. Eventually the relations reached a new level of course, especially through Alexander the Great and the development afterwards. At this point there Europe opened up more towards the East, a process that was continued through the East’s answer to Europe.
Take what happened to Christianity for example. Christianity was no independent factor, it was a local European development. Christianty is a synthesis of Greek philosophy, the Jewish religion and elements of the Orient. All of these traditions were integrated during the Roman Empire to a shared European tradition. I find this one of the magical aspects of the European and Greek history. That they could integrate foreign things and by doing so became stronger, not weaker.

What role does the Greek awareness of Greece being the starting point of democracy and Europe play in Greek society today? How does that manifest itself in the people’s consciousness?
Of course, the tradition of the ancient Greek culture is omnipresent, also today. Yet, you should be careful to think that the ancient Greek is still alive like it was 3000 years ago. Modern Greece continues some of it and some of course it doesn’t. Everything else would have been like a fossilisation process.
But the old Greece plays a big role in our understanding and self-awareness today. Sometimes I think this helps us and sometimes it can be a hurdle concerning Modern Greece. It can be helpful, because one can recall on own experiences to put different situations in the right context. Regarding democracy and democratic processes, one can take scenes from the comedies of Aristophanes or the works of Plato to make comparisons.
On the other hand it can be a problem. It is easy to be proud of one’s history and be satisfied with what has already been achieved. We have a deficit here. In all honesty, you have to say that Modern Greece has not done enough to become its own factor, to promote own ressources. If you look at our culture, a lot has been done, but take science for example, take technical developments, more could have been done here. One can only hope that we can make up for these deficits in the course of time.
All in all I would say there is an ambivalent relationship between Ancient and Modern Greece.

Good, these were basically our questions. Did we forget to ask anything that is of profound importance?
I can’t think of anything. I want to thank you for you as young people from Germany starting your journey through Europe here. There is a very special relationship between Greece and Germany. A relationship that is also very important for Germany.
Germany without Goethe is unimaginable, but he same goes for Goethe without Greece. The specialty of the German cultural identity comes from its special relationship to Greek culture to a large extent. The German culture is no Romanic cultur like the French, like the Italian. And if it relies on something next to the Roman, then explicitly the Greek. Attempts like this to study one another better, to keep this relations alive are very important, especially in a time where one can’t necessarily rely on the press, concerning the image of Greece and Germany and the image of Germany in Greece.

If you would like to hear the interview in full length you can do that here, though it is unfourtunately only available in German: