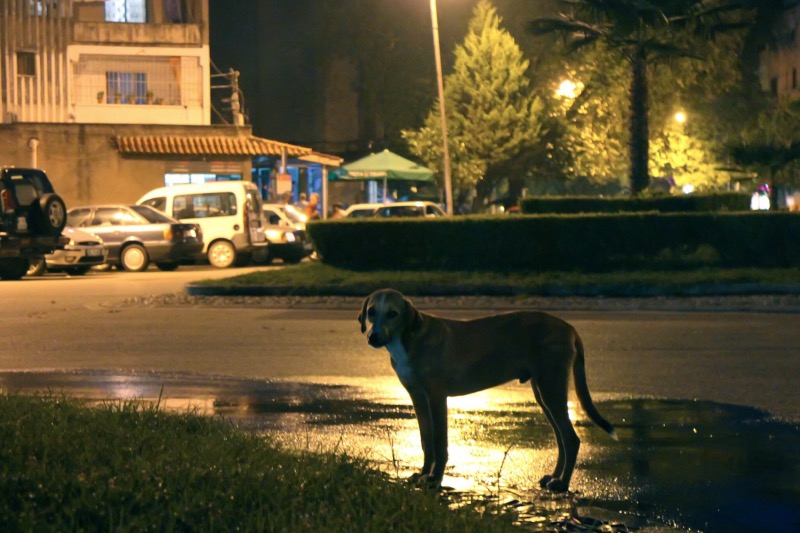 The dogs of the streets of Shkodra are waiting for their meat. Soon they will be fighting recklessly over the meager leftovers that the butchers bring them. Goat’s skulls, cow’s jaws, bones of unidentifiable origins with small shreds of meat loosely attached. Then they will know no allies, all that matters is their own survival. And every little piece of meat hanging from a bone that probably once was a pig is essential for being able to be back here again tomorrow.

“Here” is the five gray wheelie bins under the orange glow of the street lights at one of the intersections in the centre of Shkodra. As soon as it gets dark, the gang gathers there, it’s the same spot every evening. The air smells of rotten meat and garbage. Old pieces of animals, gnawed to the bone, are lying in the gutter. On the broad main street cars are speeding through the puddles, on the other side of the road cafés and bookie’s are lined up behind the pavement. Evening is arriving in Shkodra in the north of Albania and the dogs are waiting. 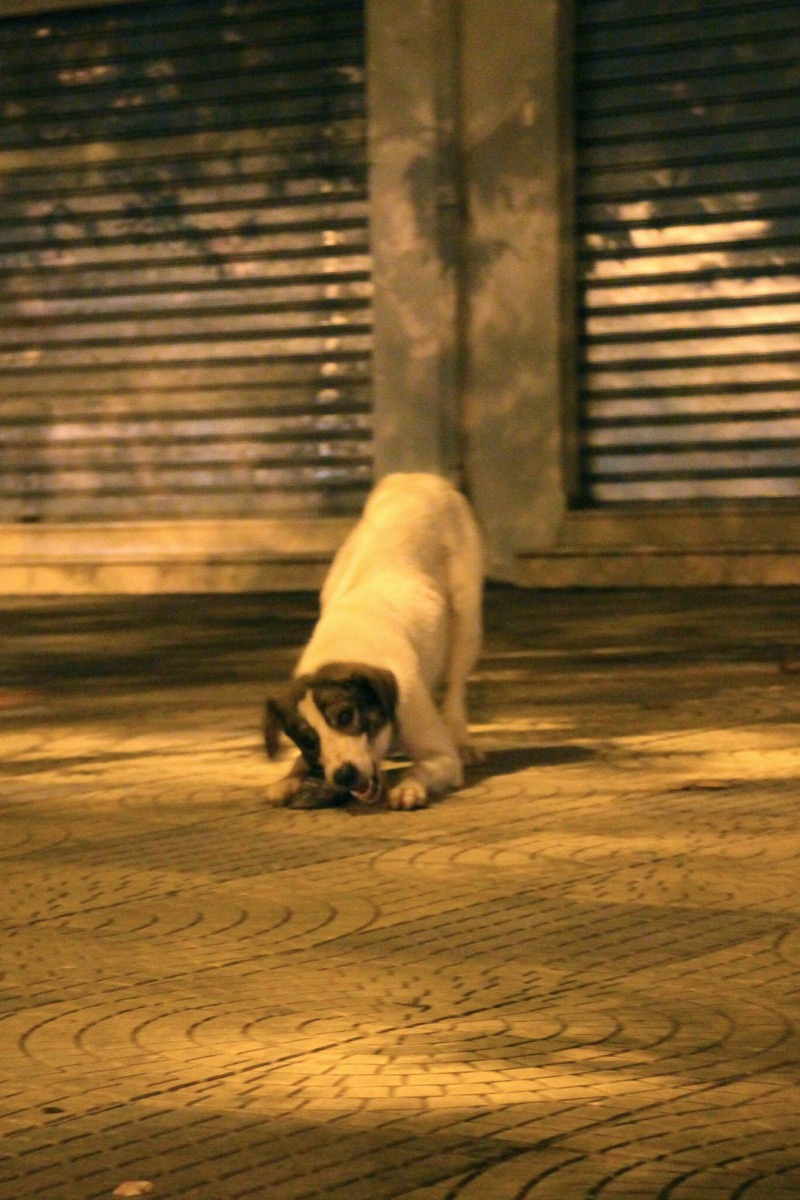 Andi is there, tall and intimidating with black markings on the neck, ears and face of his white fur. He is pacing up and down impatiently. Bruno is also there, not using one of his legs, and a second one being injured as well. He is only putting it down so he doesn’t fall over. The injuries are probably the result of one of his many past fights he has had here with other dogs in the gang. He is smaller than Andi but no less confident. Other dogs are waiting in the background, all thin, all hungry. Their time has almost come.

At the same time a few hundred metres down the main street, Werner is walking on the pavement always keeping a safe distance to the bins and the gang. Werner has short, light brown fur and is skinny just like the gang members. Apart from that he has not much in common with the group at the corner of the street. His ears are floppy, he often looks over his shoulder as if afraid of something and gets out of the way of people. He looks like the hunted, not the hunter. At a roundabout he glances to his left and walks into the street. On the inside of the roundabout water has collected into a puddle. Werner lowers his head and drinks while the cars go by without paying him any attention. 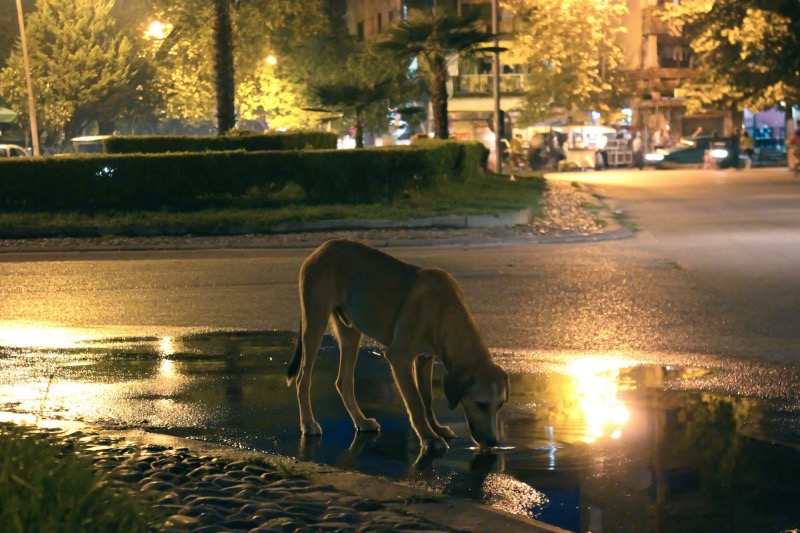 The gang is getting restless. It’s getting late. Two women are walking around the corner coming towards the gang. As they are trying to squeeze past the group Andi growls at them angrily. This is their territory. The women stop, then squeeze along the house walls past the dogs, always keeping as far away as possible. They want no trouble. But Andi is still unhappy. He doesn’t like waiting. Then all the heads turn in the same direction, their noses are twitching. A figure is walking towards the dogs, with full plastic bags in his hands. Finally. The butcher is here.

Werner is trying to sleep. He is laying underneath an old red Mercedes which is parked in front of a café. But he can’t relax. He is constantly raising his head, watching people walk by and making sure no other dogs come close. After half an hour he is back up on his feet. He is crossing the road, this time without looking around. He doesn’t see the headlights rushing toward him. Tyres are squeeling. 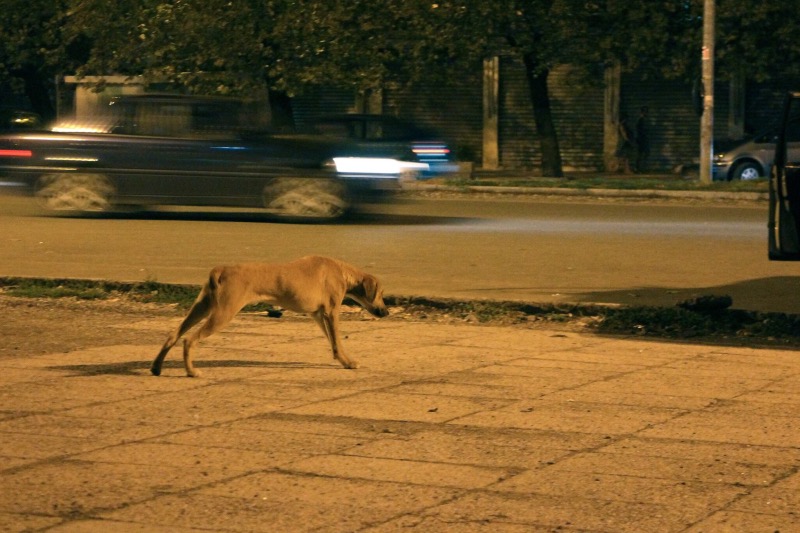 The Butcher is emptying his bags. Not into the bins but next to them for the waiting gang. It smells of decay. It’s leftovers he can’t sell in his shop. With most it’s unclear what animal they come from. There are skulls, jaws, thigh bones and knee joints. It’s no feast, just some small shreds of meat. The dogs are all over them. Andi is barring his teeth at everyone who is trying to take away his piece of cow leftover. The fortunate ones who managed to snag a piece are retreating looking for a quiet place to have their dinner.

In Tirana the stray dogs were shot at night

The gang is infamous in Shkodra. “I always tell my guests to avoid that corner and take another route to avoid the dogs”, says Florian, who runs a hostel in Shkodra. The local butchers always throw their left-overs in the same bins or leave them next to the bins for the dogs. The dogs know that. The locals don’t even pay the dogs any attention anymore. They are used to seeing them walk through the streets.
But the dogs are a serious problem and sometimes even dangerous to humans. Kujtim Mersini, chairman of the NGO Protection and Preservation of Natural Environment in Albania (PPNEA), estimates the number of reported injuries from dog attacks to be between 100 and 150. The number of unreported cases is likely much higher. With these attacks, the risk of transmitting diseases is also a problem.

In the whole of Albania stray dogs are a common sight. Counting them is difficult, there are no official statistics. The European Society of Dog and Animal Welfare (ESDAW) estimates that there are around 150000 stray dogs in Albania. “There are no measures in place to contain the population”, Mersini says. During the time of communism there were some measures and the situation wasn’t problematic. Between 1990 and 2000 however, the stray dog population increased dramatically. In 2001 a new program was introduced in Tirana and other municipalities. “This was a cruel program since the dogs where shoot by night by fire guns”, says Mersini. “The practice was problematic since it caused a lot of noise due to the shoots and the screams of wounded dogs, because the aim of the employed hunters by night was not good.” Another problem, he explains, was the blood that was smeared over the pavements. The program was abolished after protests from animal rights activists. “However it had a great impact in minimizing the stray dog population.” Later the program was replaced by another one where dogs were captured, sterilized, got a vaccine shot against rabies and where then released again. That worked well but was expensive, so in 2012 it was stopped. “Since then there have not been any effort to control the dog population.”
The situation is not only a problem for humans, the dogs are suffering as well. Many are close to starving because of the high completion for food, a lot of the dogs have diseases and often the dogs are also attacked, kicked and beaten by humans. And many end up under the wheels of a car. In Albania, people get used to the stink of decaying dogs laying in the street in the middle of the town pretty quickly.

Werner has already forgotten the white Mercedes that almost killed him. The driver had spotted the dark figure just in time and managed to step on the breaks. Werner wasn’t too concerned. He has found a new destination: A traffic island separating the lanes of the main street near the garbage bins, surrounded by hedges. Someone from the gang has left a cow’s lower jaw there after gnawing at it and eventually losing interest. Werner isn’t letting that opportunitiy pass. Hidden from the other dogs he starts chweing on the jaw. Most of the meat is gone, and Werner is mainly biting on cow’s teeth. 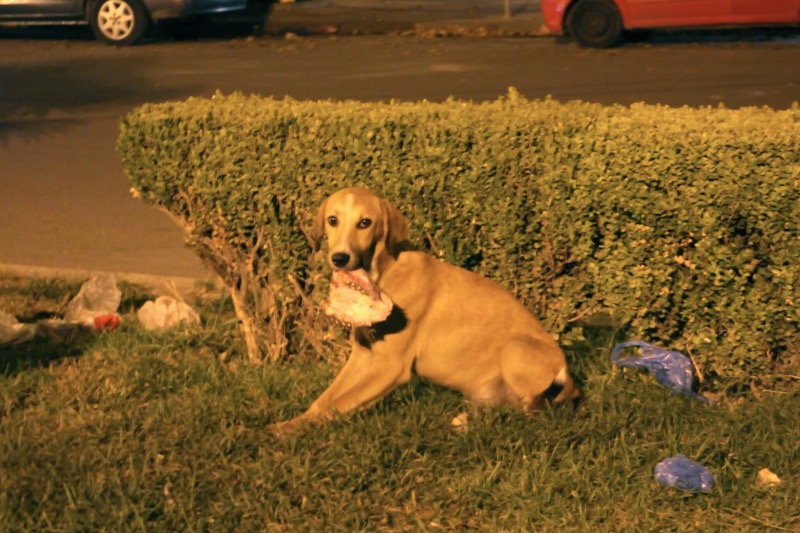 Eckhard isn’t content. He hasn’t been able to find a satisfying piece of meat. With his thick black fur it is hard to see him in the dark, but it’s easy to hear him. He tries to convince other dogs to leave their food to him by barking at them loudly. Without success. Then he his gaze falls on the traffic island in the middle of the road.

Werner spots the danger late. One moment he is chewing contently on the jawbone when a small black dog with a short tail comes running at him barking angrily. Werner retreats and watches from a few metres away as the other dog is eating away at the jawbone.
Again, Eckhard is not content. There is almost no meat on the jawbone. He gnaws on it listlessy before changing his mind and turning back towards the garbage bins. Andi has found a piece with some meat left on it. Eckhard runs at him, barking. A moment ago this tactic has worked fine. But rather than retreat, like the skinny dog with short lightbrwon fur and floppy ears did, Andi is unimpressed. He barks an angry answer. It’s clear who runs this intersection. Eckhard disappears around the corner.

Werner has eaten enough. He has finished chewing off the last small pieces of meat from the jawbone. That Italy he will get today, still hungry or not. He puts down his head. Safe, inbetween the hedges surrounding the traffic island he falls asleep, while left and right the cars speed by.