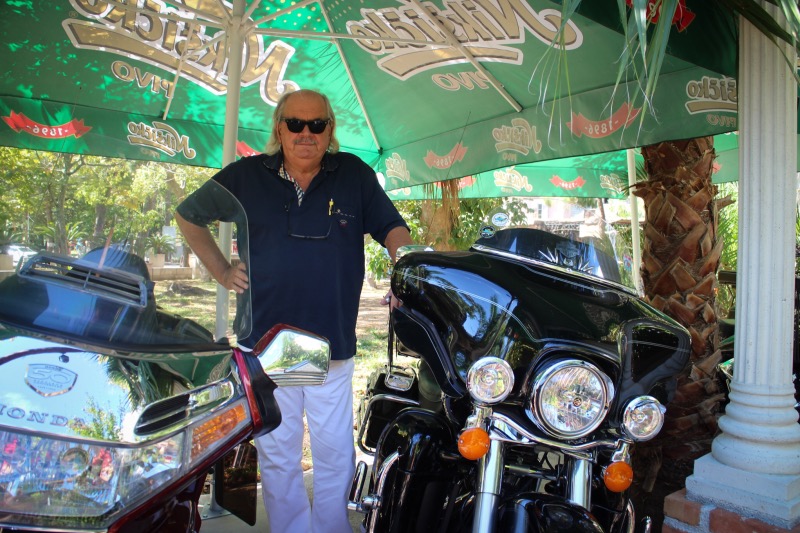 At the edge of the town Budva in Montenegro, Krsto Niklanovic is waiting. Always. For everyone. Hoisted several metres up in the air, his image is looking down on anyone entering the town. He is sitting on his Harley, his long grey hair flowing out from underneath his helmet. With this poster Krsto is advertising his Beer & Bike Club a bar and meeting point for bikers. But it is only in the evening when he is a biker. During the day he is a business man. He owns a huge restaurant that is directly bordering on the bikerclub.

That is where he strolls between the more than 700 seats, wearing a poloshirt, white trousers and white leather shoes. He greets his guests and chats to them like they are old friends. “Everyone knows me”, says Niklanovic. “Not just in Budva, they know me in Montenegro, in Austria, Serbia and Croatia. They know me everywhere.” In the evening the two metre tall giant usually sits in his Beer & Bike club and sips water from a plastic bottle. “I don’t drink alcohol”, Niklanovic explains. “Maybe occasionally a Cognac or something like that, but apart from that I’m not a fan of alcohol.”

Niklanovic’s Beer & Bike Club isn’t necessarily what you would expect from a bikers’ hangout. Not a dark cellar with smoke hanging in the air and a sticky bar, no broad shouldered men sporting handlebar mustaches and leather jackets talking about wrenches. Rather a sort of conservatory connected to a large restaurant with polite waiters and all kinds of guests: young people, families and seniors are all there. On the tables stand menues in 21 different languages. On the wall there is a TV that silently plays a Michael Jackson music video and in one corner stands a fake petrol pump with a “no smoking” sign taped onto it. Two men siting on bar stools play Johnny Cash and “ Take Me Home, Country Roads” on electric guitars.

Having the right music in his club is very important to Niklanovic. “The newer generations are used to a different kind of music. A two-rhythm-music, as I call it. Duk duk duk duk. That’s all there is.” His own favourite band are The Eagles. In the Beer & Bike Club the same band from Budva, the two men and their guitars, has played country and rock classics since the club opened. A drummer, Niklanovic explains, would be too loud. 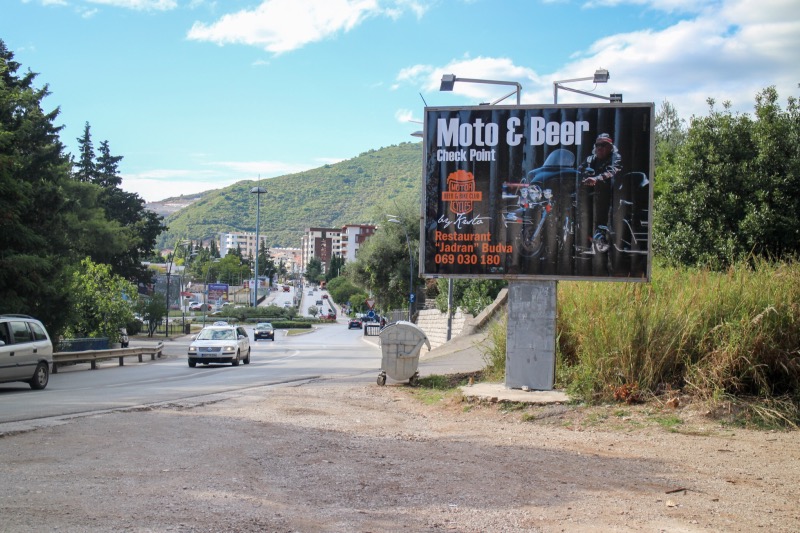 Among the bikers there is a playful rivalry between Harley owners and BMW owners. “They always say that we’re driving farming vehicles not bikes, and we always say that they are driving computers and not bikes.” But it’s all in good spirit. “There’s no conflicts or drugs around here”, Niklanovic says. “It’s not like a lot of people believe, that bikers are a gang of wildlings.” Rather, the different clubs often work together on charity projects. Every New Year’s Day members of different clubs dress up in Santa costumes and drive to poorer villages bringing presents for the children. Or they all go together to give blood. Bikers are a very helpful bunch, Niklanovic says. “We have an old saying: One for all and all for one.”

Niklanovic’s first motorbike was the bike of his father, a 1952 BMW R211 with a passenger cart on the side. Three years ago he found the exact same model and bought and restored it. Today he has several Harleys and a total of six bikes. “I would like to buy some more, but my wife won’t let me.” In all of Montenegro there are only 15 or 16 Harleys, Niklanovic explains. He is still going on road trips with his friends. “I have been all over Europe”, he says. “And I hope to keep going for a few more years if my health allows it.”

During the times of communism in Yugoslavia Nikanovic was also touring through Europe. His memory of communism is not necessarily a negative one. “Our communism was different to the one in East Germany, Czechoslovakia or Russia”, he
says. They were always sort of in the middle between the two opposing blocks, he explains. “A little bit here, a little bit over there.” Back then a Yugoslavian passport was the most expensive to get. With a German passport you could only go to countries in the western block. With the Yugoslavian one you could go almost everywhere, he remembers. Only for the USA you needed a visa.

That is excactly where Niklanovic dreams of going. The USA holds the holy grail of every biker. “My dream is that stupid Route 66”, says Niklanovic. Every year he talks about it and plans it with his friends, but they are all not the youngest anymore. “Someone always has some troubles and aches. But I hope we will manage to finally go there in the next two or three years.”